Least Restrictive Environment - can we use technology to help provide our special education students a LRE?  Of course we can! And one of my favorite ways is Dropbox.  Especially when I can pair Dropbox with an iPad or other device.

Let's say a student's IEP calls for you to provide notes.  But let's also say that this student isn't particularly organized so she loses the note before the end of the unit.

Enter the magic of Dropbox.  Set up a folder and share it with the student.  Drop the notes into the folder.  SHAA-BAM! She's got the notes!

Let's also say she has the good fortune of having a mobile device.  She can load the Dropbox app (available for iOS, Android and Blackberry).  Now she has the notes where ever she goes.

And in one fail swoop she's gone from being the kid who needs the notes given to her to the kid that has the notes on her device.  LRE and added coolness - DOUBLE SHAA-BAM!

But why stop there?  Offer access to any student with a mobile device.  Now you're a hero.

If you need more information about Dropbox cloud based storage, click here.

What are some other ways you use Dropbox or other cloud based storage with your students?

This was my 4th year to attend TCEA and by far the best!

I had the pleasure of presenting 2 sessions on Tuesday at the Technology Applications Teacher Network.  I was very nervous before each session but they both went very well.  You can check out the session resources here.

To be honest, I was not looking forward to the keynote speakers because I not heard of them.  I'm really glad I attended all three!  On Wednesday Peter Sheahan talked about change.  Change is an interesting subject to me, why do people resist change so violently?  Mr. Sheahan provided some interesting insight I'm still pondering. My favorite quote from him was "Technology will not make a mediocre teacher better, it will amplify what's already there." Thursday was Chef Jeff Henderson. Chef Jeff learned to cook in prison and is such an inspiration.  Will Smith will be playing him in the story of his life.  That makes him the 2nd speaker I've heard at TCEA to be played by Will Smith (guess the other in the comments).  At Friday's closing session Seth Mattison discussed generations.  His talk was most useful because he dealt with how each generate communicates.  I loved this slide from Seth:

I attended lots of great sessions.  I walked out of one and wanted to walk out of another but I was sandwiched in. I facilitated a session for people who had premium registration.  That was nerve-wracking.  People have to be let in, put on a wait list then let in.  Some people were very grumpy about it. I did not like that.  But the session was wonderful and the presenters very kind.

But, hands down the Twitter made TCEA 2013 the best.  Well, not the actual app Twitter but the people I've met through Twitter.  I did not feel alone at TCEA because I already had a network of people to hang out with.  I was able to meet some of my tweeps in person for the first time.  It wasn't even that awkward to say "I follow you on Twitter!" to a complete stranger.  And it was so cool to have people say "Oh hi! I follow you on Twitter!" I've come a long way since EdCamp Dallas.


Because of Twitter, I was comfortable plopping down in a chair (or bean bag) in the digital square and strike up conversations.  I had never visited the Digital Square but I spent a lot of time there this year.  There were awesome sessions there, but more importantly, awesome conversations.


I tweeted this at the end of TCEA and I really mean it.  I enjoy TCEA every year but this one was so much better.  I wouldn't go back to the old way.  The way of isolation.  I'll continue to meet educators from across the world on Twitter.  I'll learn from them.  Hopefully, I'll teach them something.  I'll meet them in person and feel like I've known them forever.  Join me on Twitter! 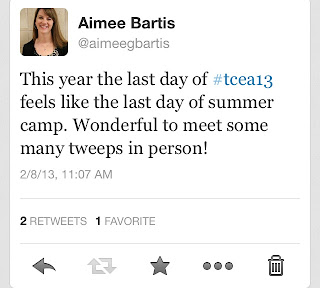 I am so excited to present at the Technology Applications Teachers Network Tuesday at TCEA! I am doing 2 sessions and the resources for both are below.

If you would like copies of any of the documents show on the Prezi, please email me. I'm happy to share!

If you attended the sessions, please feel free to complete the session evaluations here