This is definitely a 'worlds collide' post.  Tuesday, April 2nd is World Autism Awareness day.  I'm a mom of 3 boys and my youngest has Autism Spectrum Disorder. 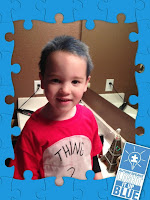 I can tell you from first hand experience that the iPad has been an important tool for B.  He was mostly non-verbal until he started using the iPad.  We used many of the ABA apps to build his vocabulary. There are many ABA apps and many of them are free this month!

But I saw a real change when I purchased The Monster at the End of This Book.  I have a hardback version of this book but the app really caught B's attention.  He really loves interacting with the book and breakout Grover out of barriers.

B loves numbers so the Team UmiZoomi app is a favorite.

But lately, my favorite school app has become B's favorite app.  Educreations.  Quite by accident, I stumbled onto a way to build B's fine motor skills.  I purchased a stylus so I could take notes at TCEA. (I still love to write notes).  B discovered it and started using Educreations to practice his letters.  Through his 'play' on Educreations, I found out he could spell words. 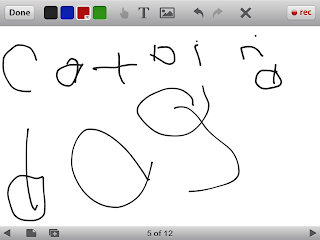 We've also made a couple of videos.  I wrote the letters of the alphabet first then pressed record.  He named all the letters as I advanced the recording slides. He loved replaying that video over and over.

You can also get the app that I used to create B's picture for free. It's called Light It Up Blue 2013

Are you Plugged In?